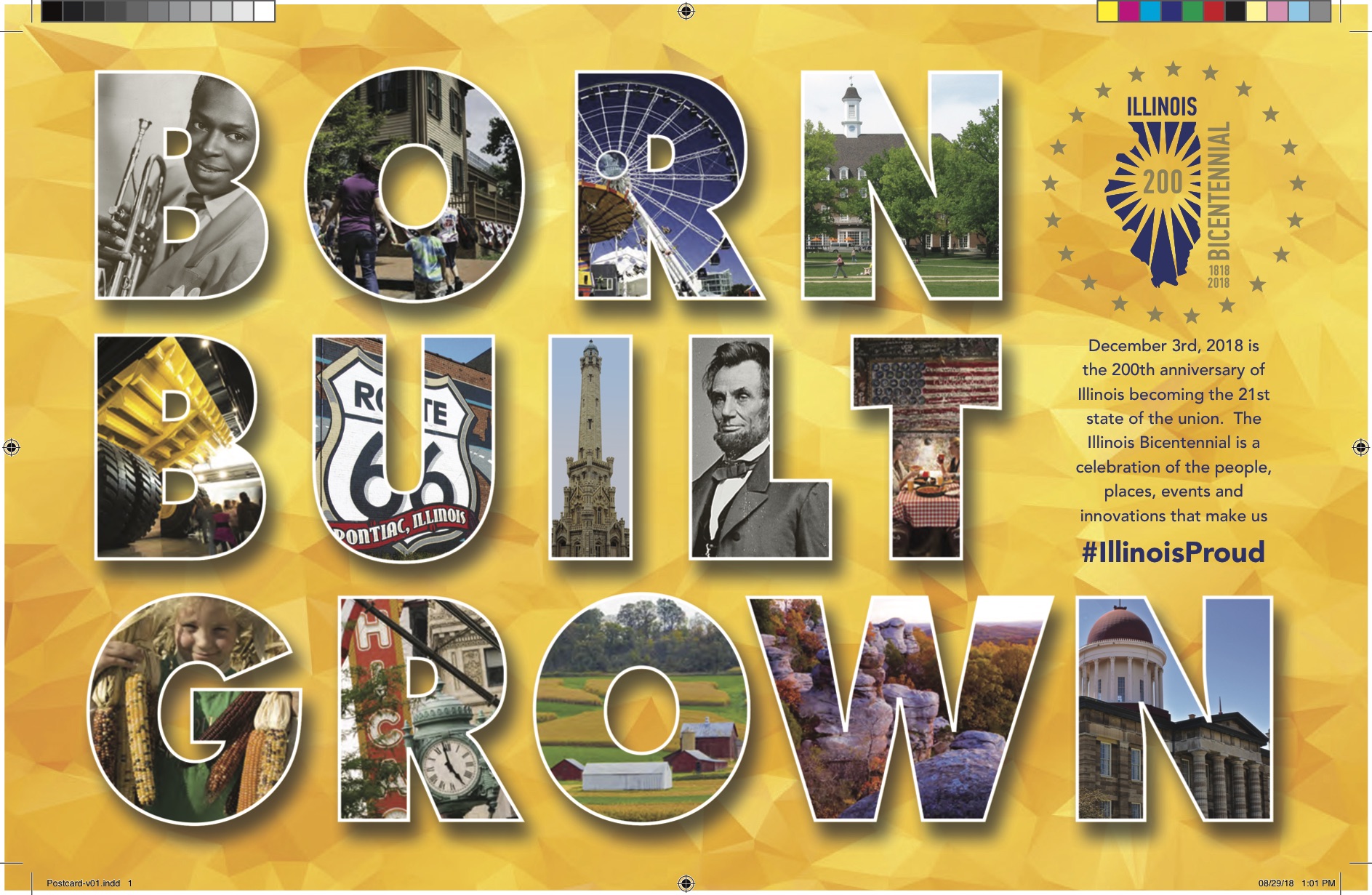 Those three words exemplify the past, present, and future of Illinois, as well as describe our story as a company built here, for here. They also make up the slogan of the Illinois Bicentennial, the official year-round celebration of the Prairie State’s 200th birthday. As a sponsor of this important milestone, we know the value of this area and are proud to recognize what makes our state so great.

On December 3, 1818, Illinois became the twenty-first state to join the Union and forever influenced the United States of America. As home to the world’s first skyscraper and the Ferris wheel, as well as Ernest Hemingway and Gwendolyn Brooks, Illinois has had a groundbreaking and influential impact on our country’s architecture, infrastructure, culture, and politics. (You may have heard of Abraham Lincoln or Barack Obama.)

The Bicentennial mural is a nod to this colorful history with the “Born Built Grown” slogan splashed across a bright yellow background. Iconic images of Route 66, Marshall Field’s, Lake Michigan, and state parks are featured in the individual letters and pay homage to the influential landmarks of the state. The official seal of the Bicentennial is also featured on our mural building with its 21 stars to represent our place as the twenty-first state. The shape of Illinois with a sun-like graphic in the center and the number 200 also add to the visual representation of the powerful influence radiating from our home state. This artwork recognizes the best and brightest of our state and encourages viewers to learn more about how to get involved at Illinois200.com and with the #IllinoisProud hashtag.

We’re honored to show our support for the Illinois Bicentennial, a once-in-a-lifetime opportunity to commemorate our state’s birthday with events, projects, and programs happening across Illinois. It’s also a chance to unite statewide partners and people who continue to foster strong connections to this area. Together with the Bicentennial Commission, we invite you to join us in celebrating the amazing people, places, and things that are being born, built, and grown in Illinois every day.

Be sure to check out all things Illinois during the “200 years in 100 days” celebration from August 26 through December 3. The Bicentennial calendar is filled with events during this time leading up to the birthday bash on December 3 at the United Center in Chicago. We hope you can join us in celebrating the big 200! We’re thrilled to recognize our home state as we honor both the past and the future.

For a calendar of Bicentennial events and to learn more, visit: https://illinois200.com/

Related Topics
September 17, 2020
When your parents need financial help
by Next Avenue
September 03, 2020
Worried about losing your job? Take these steps now
September 03, 2020
How to explain to your kids that money is tight right now
by Caroline Bologna